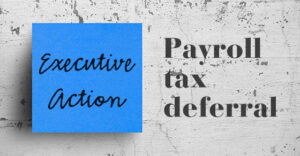 On August 8, 2020, President Trump signed an executive memorandum that defers an employee’s portion of Social Security and Medicare taxes from September 1 through December 31, 2020. At this point, the taxes are just deferred, meaning they’ll still have to be paid at a later date. However, the action directs U.S. Treasury Secretary Steven Mnuchin to “explore avenues, including legislation, to eliminate the obligation to pay the taxes.”

The exact impact on employers and employees isn’t yet known. There are many open questions, including President Trump’s legal ability to implement the deferral. Some experts believe there may be legal challenges to this executive action.

The payroll tax deferral will be available for “any employee the amount of whose wages or compensation, as applicable, payable during any bi-weekly pay period generally is less than $4,000.”

The deferral will be calculated on a pretax basis or the equivalent amount with respect to other pay periods. Plus, the amounts will be deferred without any penalties, interest, additional amount or addition to the tax.

No doubt there is much to flesh out about this payroll tax deferral. Secretary Mnuchin has been instructed to provide additional guidance and employers can’t act on the deferral until that happens. It’s also possible Congress could take action. We’ll be monitoring developments and their implications, so turn to us for the latest information.

Democrats are at it again in California.  I personally feel that the majority of bills created by California Democrats DO NOT support what the residents of California wants. So, let’s talk about a new one, AB 1253, which can be viewed at http://leginfo.legislature.ca.gov/faces/billTextClient.xhtml?bill_id=201920200AB1253

The California Democrats  have proposed a significant tax hike on taxable income of $1 million and higher. Legislators say the tax hike would raise more than $6 billion a year to help K-12 schools and government services hurt by the coronavirus pandemic.  I don’t know about your, but I have heard many times in the past that additional taxes and fees were going to the schools, for example the Lottery proceeds were supposed to go to the school, but what they didn’t’ communicate was they were taking away existing funding, and replacing it with Lottery.  In California we pay one of the highest state income taxes, sales tax, and gas tax.  I personally feel as a CPA and business owner, we the people need to tell our representatives, NO MORE TAXES and they need to become fiscally responsible.

Anyway, here are the tax rates that AB 1253 is proposing:

The bill would apply retroactively to tax years beginning on or after January 1, 2020, and would be permanent.

Under existing law, the highest tax rate for individuals is 12.3%, but when your income is over $1,000,000 there is  an additional 1% for income over $1 million often called a “mental health tax”.   With all the mental health tax collected, California shouldn’t have a mental health problem.  However, look at our homeless challenges.  Again, from a business perspective, the State seems to just be out of control in spending and just wants to tax the residents more and more and have no accountability.

The proposal would result in a top tax rate of nearly 54% for federal and state taxes for the highest earners.   If Biden is elected, he has already stated he would roll back the Trump tax cuts, so the combined tax rate would increase even more.

California already has the highest state tax rate at 13.3%, Hawaii is the second highest at 11%.  Most other states have a state tax of about 6%, and  Alaska, Florida, Nevada, South Dakota, Texas, Washington, and Wyoming do not have an income tax.

The continued tax increases are going to continue to move wealthy individuals out of the state.  However, a change of residency needs to be done right, so if you are considering to change your residency, please contact us.  Most of the clients we have helped with changing residency, have done so properly and maintain a second home in California.

At this point, we highly recommend that you contact your State representative, and voice your opinion on the proposed tax increase and perhaps a discussion about fiscal responsibility.  Please contact us at 949-756-8080 if we can be of assistance.